Each and every hunt is its own new adventure for us. We take pride in our dedication and ability to deliver an unmatched world-class Alaskan hunting adventure!

Take a look at a few of our highlighted guest reviews. Read what they had to say about their experience hunting with Tyrrell’s Trails.

Hunt Review
Would you like to leave a review? We'd love to hear from you!
Submit Review 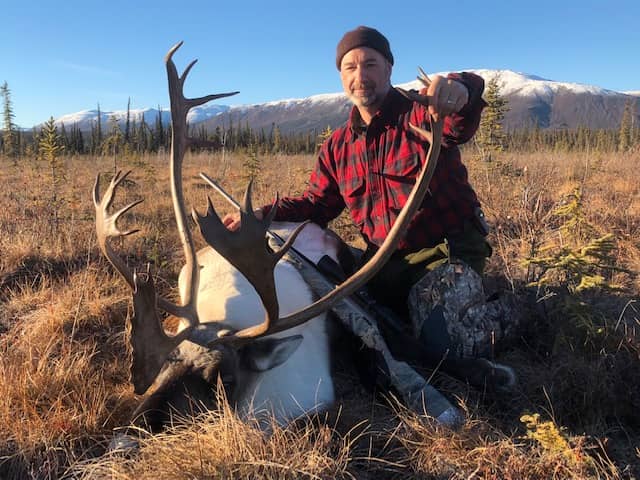 Just back with family from duck hunt in Tennessee and Arkansas—too warm and not enough ducks, but it didn’t matter once I started cooking caribou from my Alaskan adventure with your company! I can’t say enough how much fun I had, and how appreciative I am for the kindness and attention to detail and customer service you and your staff and family were to me! I felt welcomed immediately upon arrival at your base lodge, and it continued until you flew me to Coldfoot.

Michael, my guide, was an absolute professional—and a true pleasure to share camp with, while your willingness to move us to get on game was unexpected and very much appreciated. Even if I hadn’t been able to punch both tags, it would have still been one of the most memorable experiences in my hunting career. I look forward to booking my next hunt (sheep?) soon, and more of your mom’s pumpkin bread!

Merry Christmas to you and your family!

While investigating every outfitter that I could possibly come into contact with and trust me I met what feels like every possible one. I got a good feeling after I met with Tyrrell’s trails, I booked a hunt almost instantly and began planning for the two year future endeavor. As time got closer friends kept telling me that it was going to be the hunt of a lifetime and now looking back after, hunt of a lifetime doesn’t even explain the success of this outfitter and moose had.

I had been on a few lesser hunts in years past and had experienced lesser quality guides. This time however was all I could expect and more. Luke and Wes did everything in their power to make my hunt successful, in every way. Wes is (I believe) a five star camp chef, and Luke knows how to make you feel at home. Having an experience outside of my comfort zone but feeling like I was supposed to be there made the hunt and trip, harvesting a record class animal was just the icing on the cake.

I would feel comfortable sending anyone I know on a hunt with Tyrrell’s Trails due to their adaptability to make anything possible (within reason). 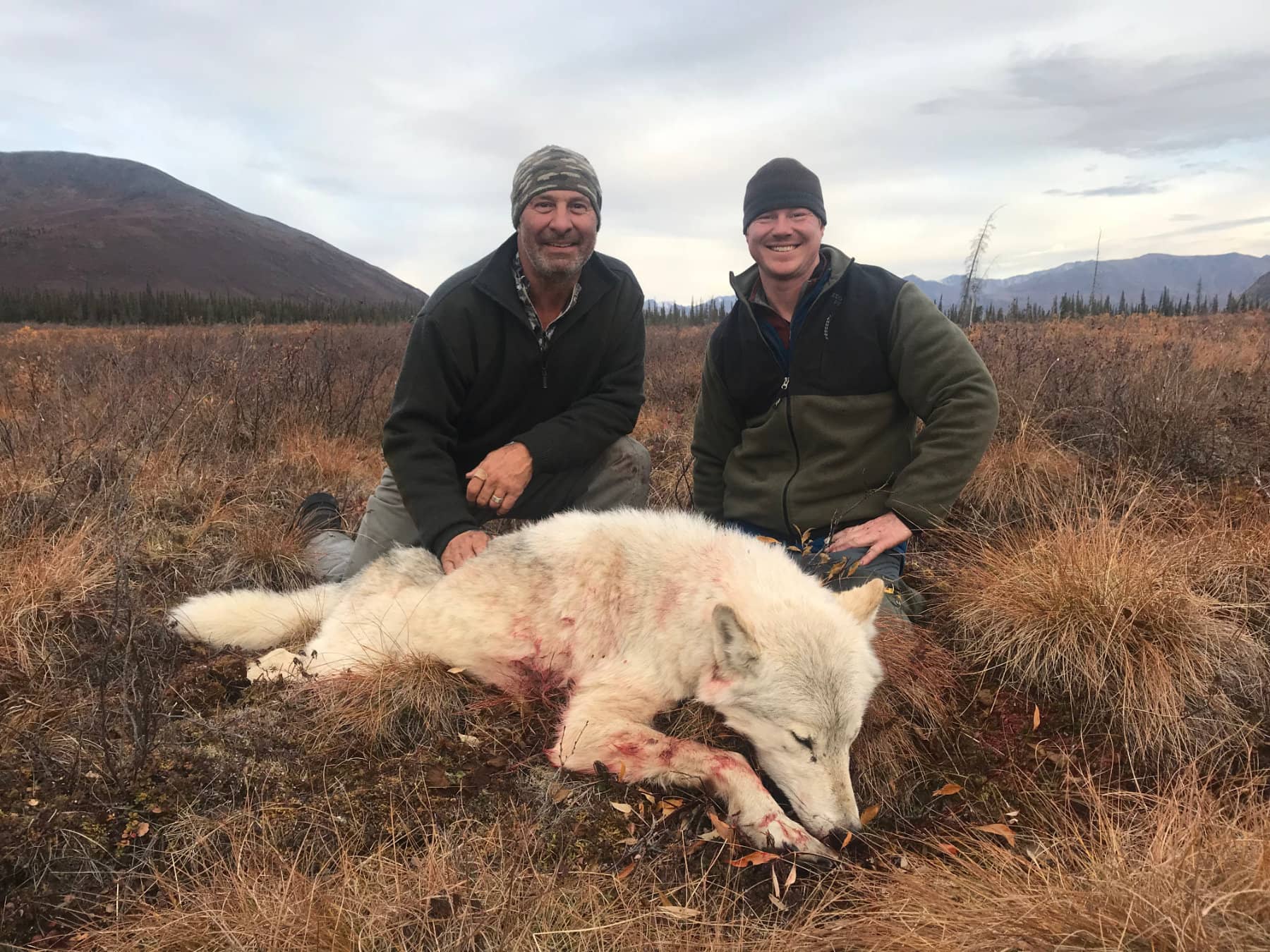 It was an amazing experience that is hard to put into words. The beauty of the Alaska wilderness, the adventure, the hunts and the Tyrrell family. I have a lifetime of memories to cherish and reflect on.

Luke has several repeat customers and I intend to be one of them.

A true Alaskan adventure with a first class outfitter who is at the top of his profession. A hunt of a lifetime for me.

I’ve hunted all my life and in other countries and this was absolutely the best hunting experience I have ever had. The outfitter, guides, accommodations and animal quality was outstanding. I can’t wait to go back. 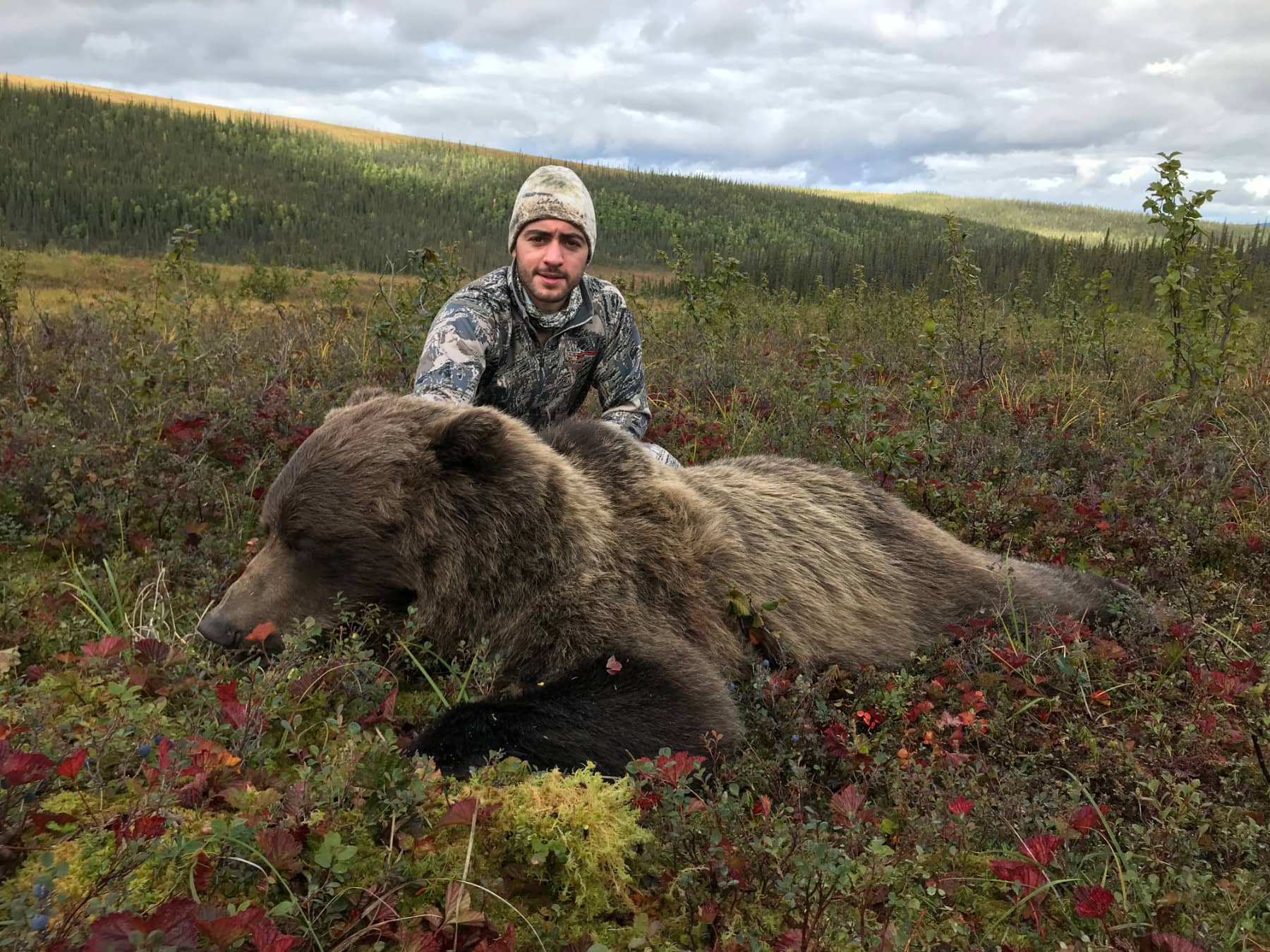 Truly an adventure of a lifetime with a gold-standard Outfitter. Thank you Luke and Wesley, looking forward to our next hunt with the sights and sounds of an Alaskan wilderness untamed and unfettered by man. 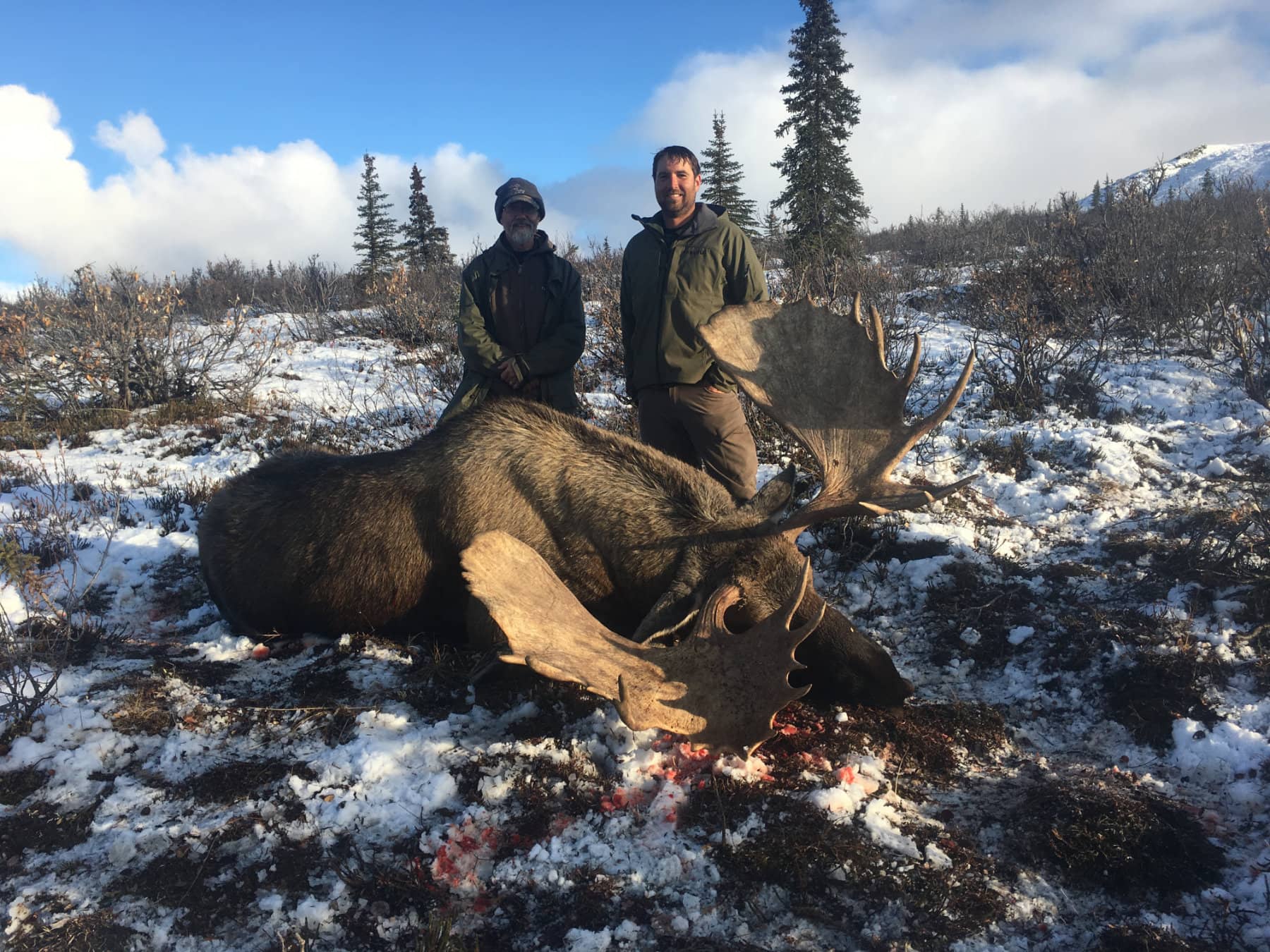 This past September, 2018, I had the opportunity to hunt Moose with Luke Tyrrell of “Tyrrell’s Trails” in Alaska. I had made many trips to Alaska but I had never seen the Brooks Range. My expectations were high and I was not disappointed.

I had the good fortune of harvesting a great mature bull Moose. My personal guide, Mike Horstman, and Luke teamed together and worked hard to fulfill my dreams.

This was a great hunt located well above the Arctic Circle. There was lots of game, beautiful scenery, good food, comfortable accommodations and Great People!

After several unsuccessful years of putting in for a special draw Dall sheep tag in the Tok and 14c I decided to book a hunt with Luke @ Tyrrell’s Trails. From the first time we spoke on the phone I knew this was going to be my trip of a lifetime.

Luke was extremely helpful with getting my tags and license and with coordinating the logistics of getting me to Coldfoot. He provided a very comfortable base-camp with excellent meals and a hot shower!

Beginning with an awesome bush-plane flight in, to spotting legal rams (the first evening) and spiking out; the sheep hunt was exactly what I was looking for. I couldn’t have asked for a better, more qualified outfitter or guide. My guide was a great hunter who put in the extra effort to ensure my hunt was a success.

I hope to do more hunting with Luke in the future. I highly recommend Tyrell trails if you are looking for a true Alaskan adventure! 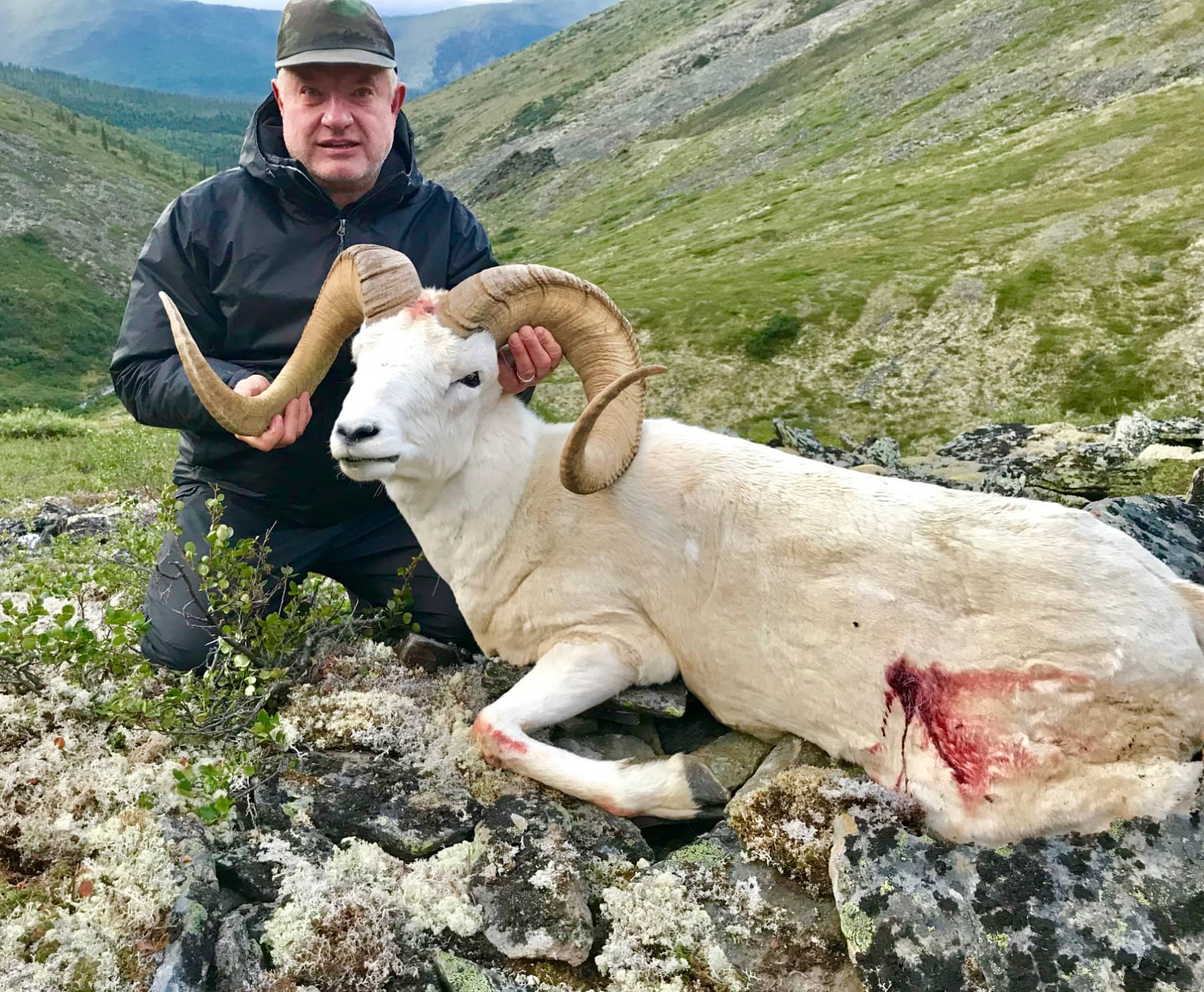 I took this 40″ Dall Sheep at 470 yards 15 minutes after the season opened while backpacking in the Brooks Range.

Absolutely one of my best hunting experiences which I’m happy to share with hunters looking to do the same. 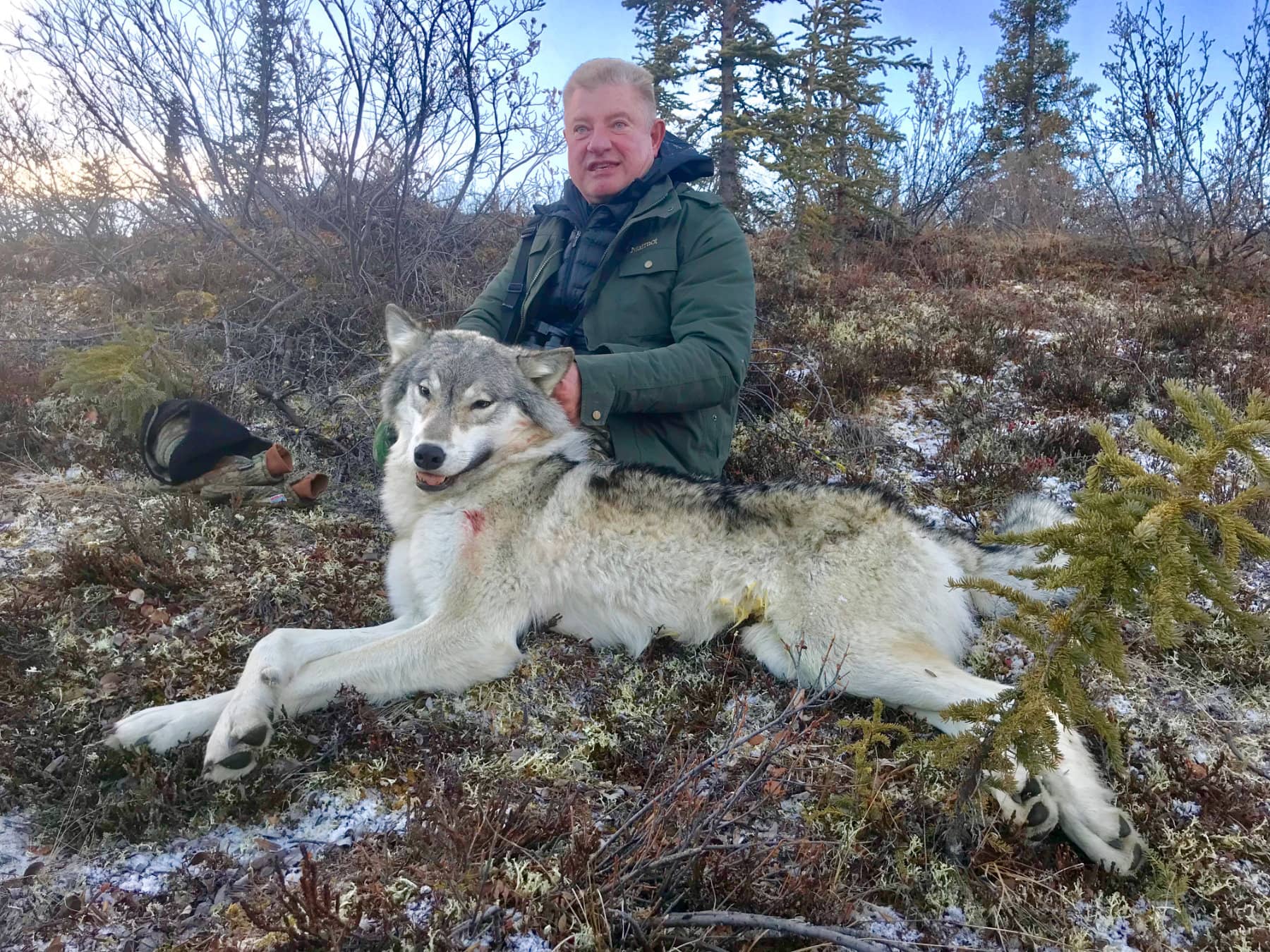 At the end of the season, Luke and Wesley Tyrrell guided me on a special hunt where I took this impressive male wolf.

I hunted with Tyrell Trails Hunting Adventures in September 2018. It was the Adventure of a Life time , For me a Dream come true. a Bucket list Hunt., Luke is a good Outfitter ,Pilot , and Guide. These are Honest people. Luke even offered to postpone and hold my hunt until the next year because the Caribou Migration was late. But I am so glad I went as scheduled. Luke told me that there was a good chance at bagging a Grizzly bear on this Hunt on a Trophy Fee., as it was booked as a Caribou Hunt. So I Went on my scheduled Hunt were I saw 3 Grizzly’s and had 2 shot opportunities. Where I Harvested a Beautiful old big Bore Grizzly Bear on the third day. The Next day Luke moved us to where the Caribou were when they finely showed up in his territory.

The Following day I Harvested a Very Nice Barren Ground Caribou Bull. He also move the other Hunter in Camp That week to a another location where he Harvested 2 very nice Caribou Bulls, on the last day of the Hunt. I also had 3 shot opportunities on Wolfe’s. I Missed the one I did shoot at but that was my bad. We also saw 6 Bull Moose and a Cow Moose. and The Bulls were all Big with 5 of them over 60 inches. I wish that the season would have been open for Moose. I also saw 8 Doll Sheep on this Hunt at least 3 were Rams. and when the Migration started I saw over 100 Caribou in one place and saw Thousands from the air flying out.

Luke’s Brother Wesley was My Guide. He is the best Guide I have ever Hunted with in My life., and I been on a few Hunts. He was very professional, By the end of the hunt he was a Friend. He got me on Game., was Patient with me and never left me behind. I messed up my knee walking out on the second day of the hunt. Wes my guide hunted with in my limitations and we still bagged game. The Packer Travis was good fellow too. and I was glad he was there when the game was down. Luke also just bought a Beautiful base camp with a nice lodge and cabin you will get to stay at before and after you go to spike camp. If you want a Good Hunt with a A+ outfitter book your hunt with Tyrell trails. I will If I ever get the Chance to go Hunt Alaska in the future.

These Guy’s are the real deal. 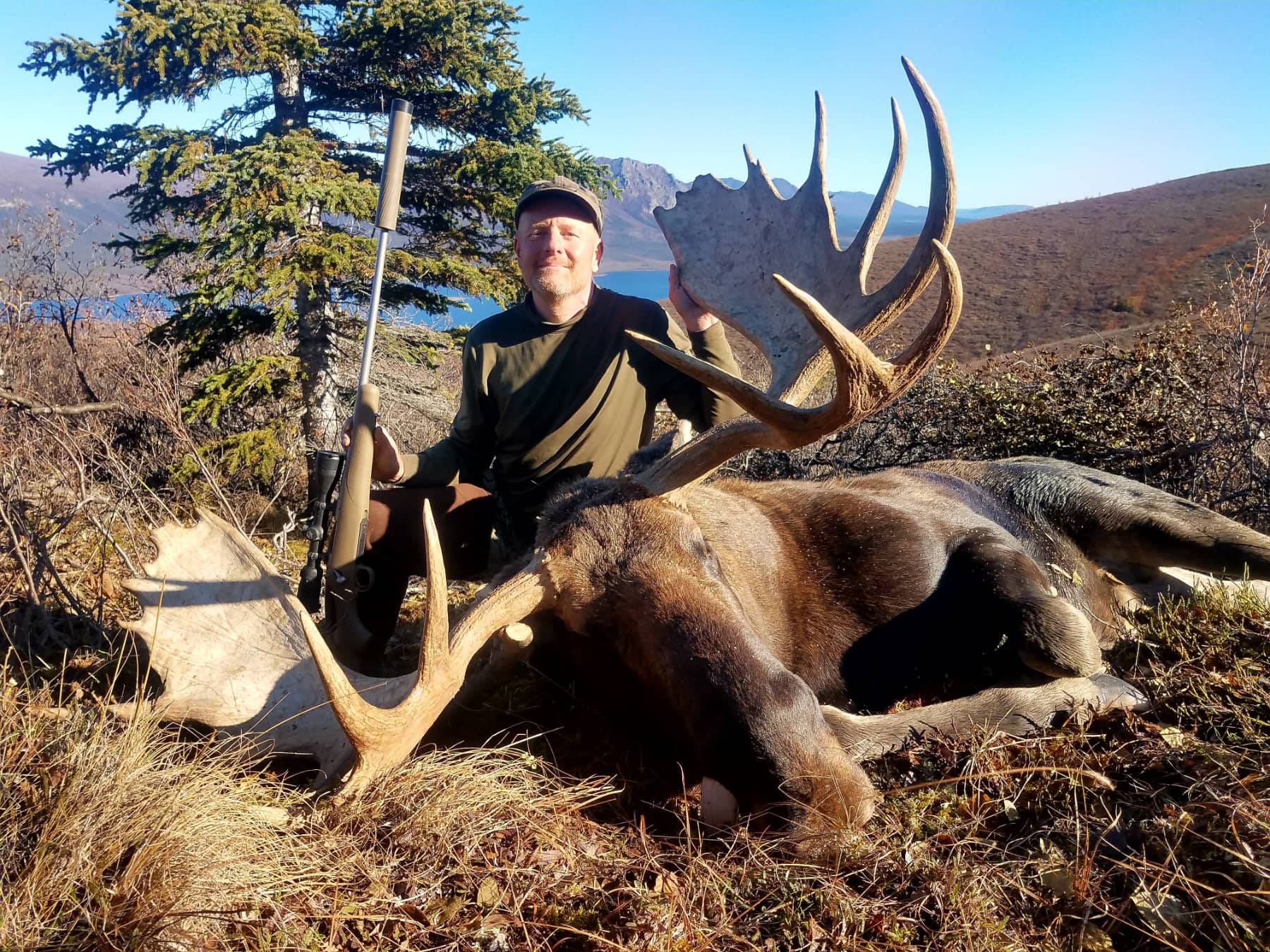 Dear Luke,
Now that I am home and there has been time for everything to sink in, I thought I would write. I have hunted all of my life and been all over. I have taken nice animals before, but never 2 on the same hunt. Your hard work before and after my hunt made for my success. Kudos to you and your professionals. I will recommend Tyrrell’s Trails to any serious hunter looking for the trip of a lifetime. 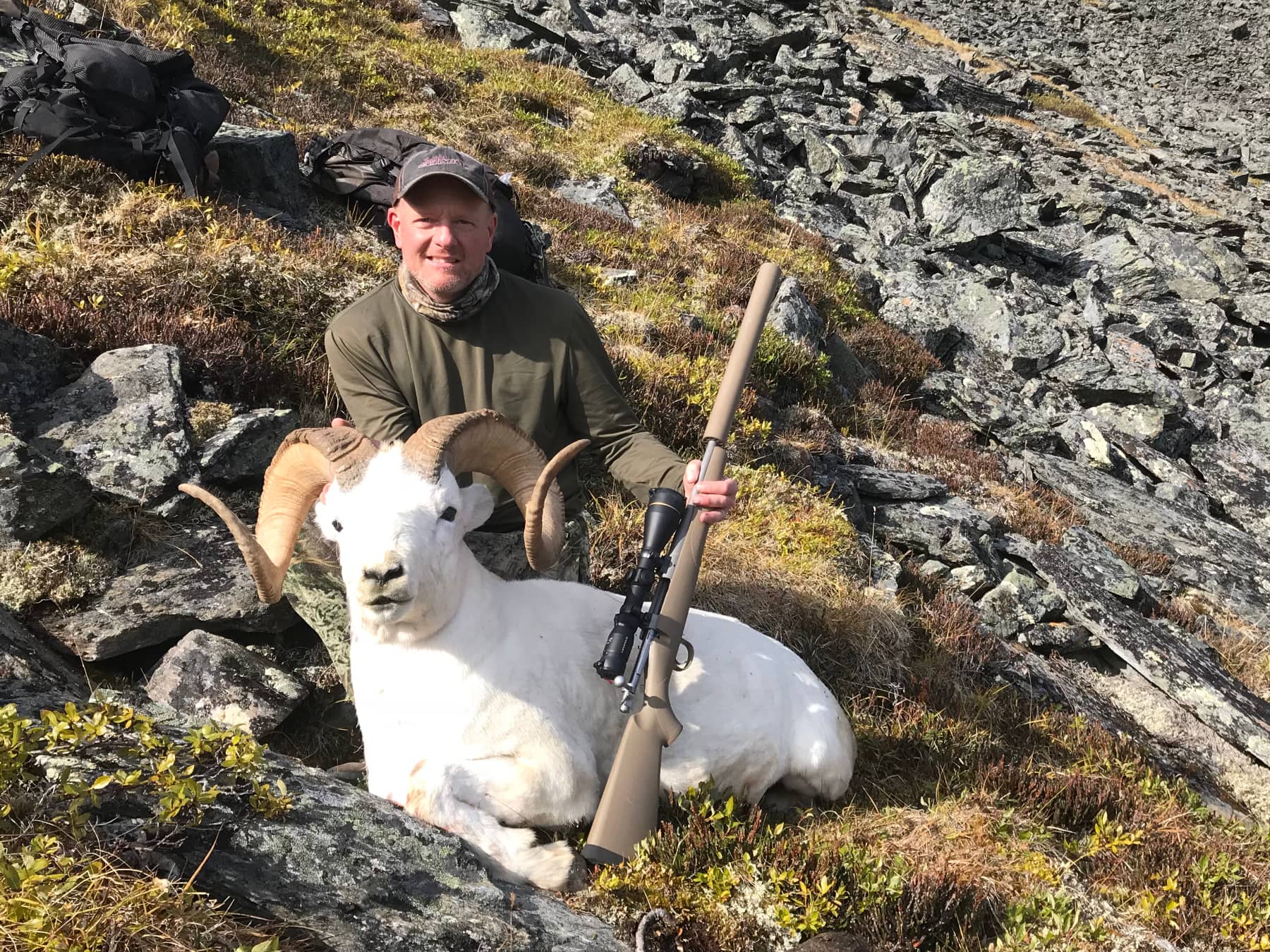 Hello Luke,
It is near Christmas time now and the thrill of taking a Dall ram still run through my head like it was yesterday. Your hard work and experience worked again. Thank you for the flights and the preparation of making my sheep hunt another home run. After the moose and caribou in 2017, I never dreamed you could show me a better hunt…….but…….oh yeah…..you did. Have a great Christmas and hope to see you soon. 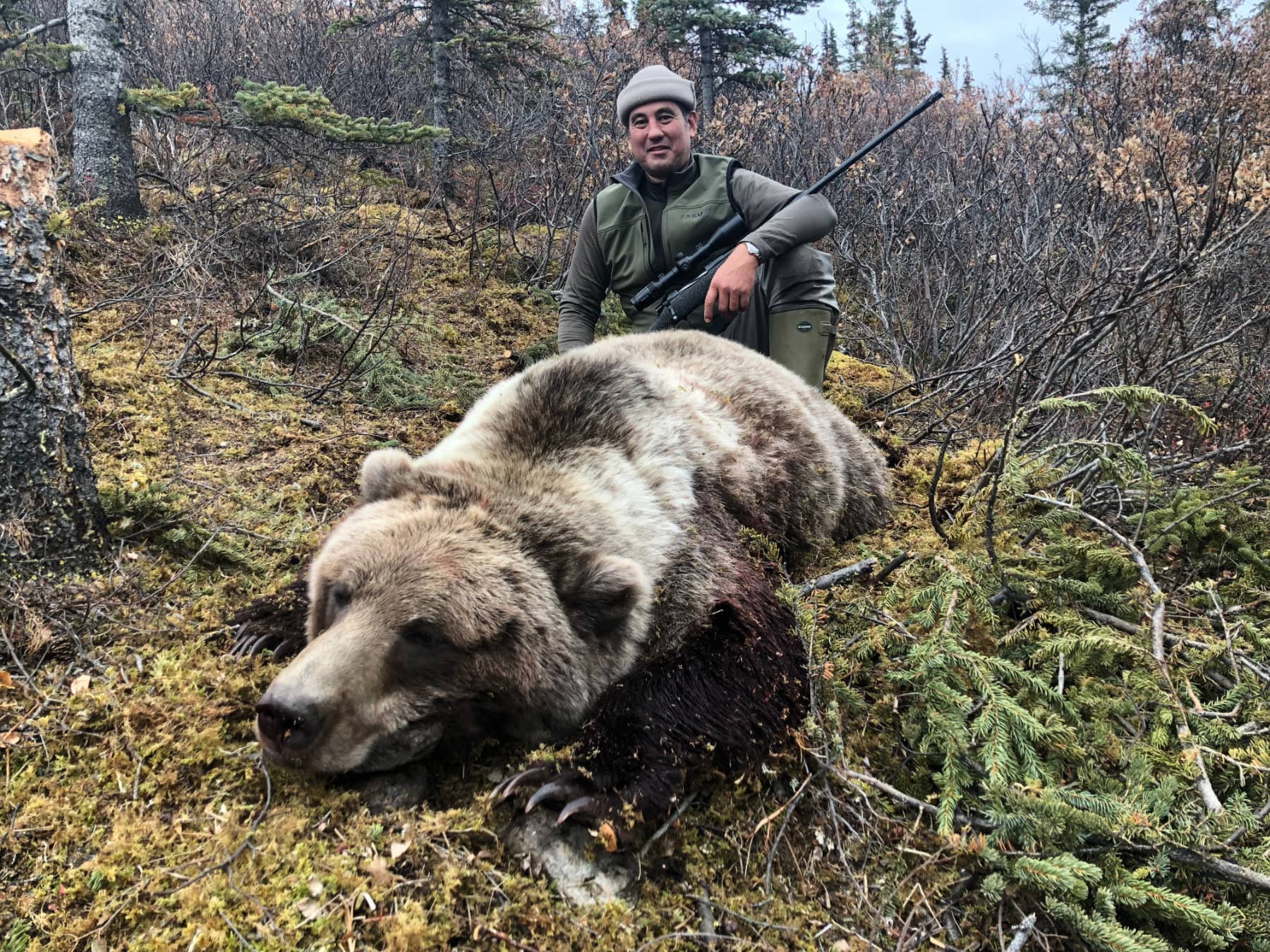 I’ve hunted Big Game extensively all over North America as well as the rest of the world for over 20 years.

I’ve done seven hunts in Alaska, the last two with Tyrrell’s Trails for moose and grizzly bear in The Brooks Range. This year will be my third hunt with them – I will go on a Dall Sheep hunt this summer with my son.

Luke Tyrrell runs among the best outfitting operations I have experienced. Logistics were flawless, equipment in great shape, hunting areas exclusive with an abundance of high quality game, and Luke is always there to “go the extra mile”. My guide, Wesley Tyrrell, was amazing, not only in tirelessly spotting and calling in trophy game (often “out of thin air”!). Packers were terrific – experienced, helpful, and most importantly, fun!

If you’re considering a hunt of a lifetime in The Brooks Range, I recommend you give Luke a call. 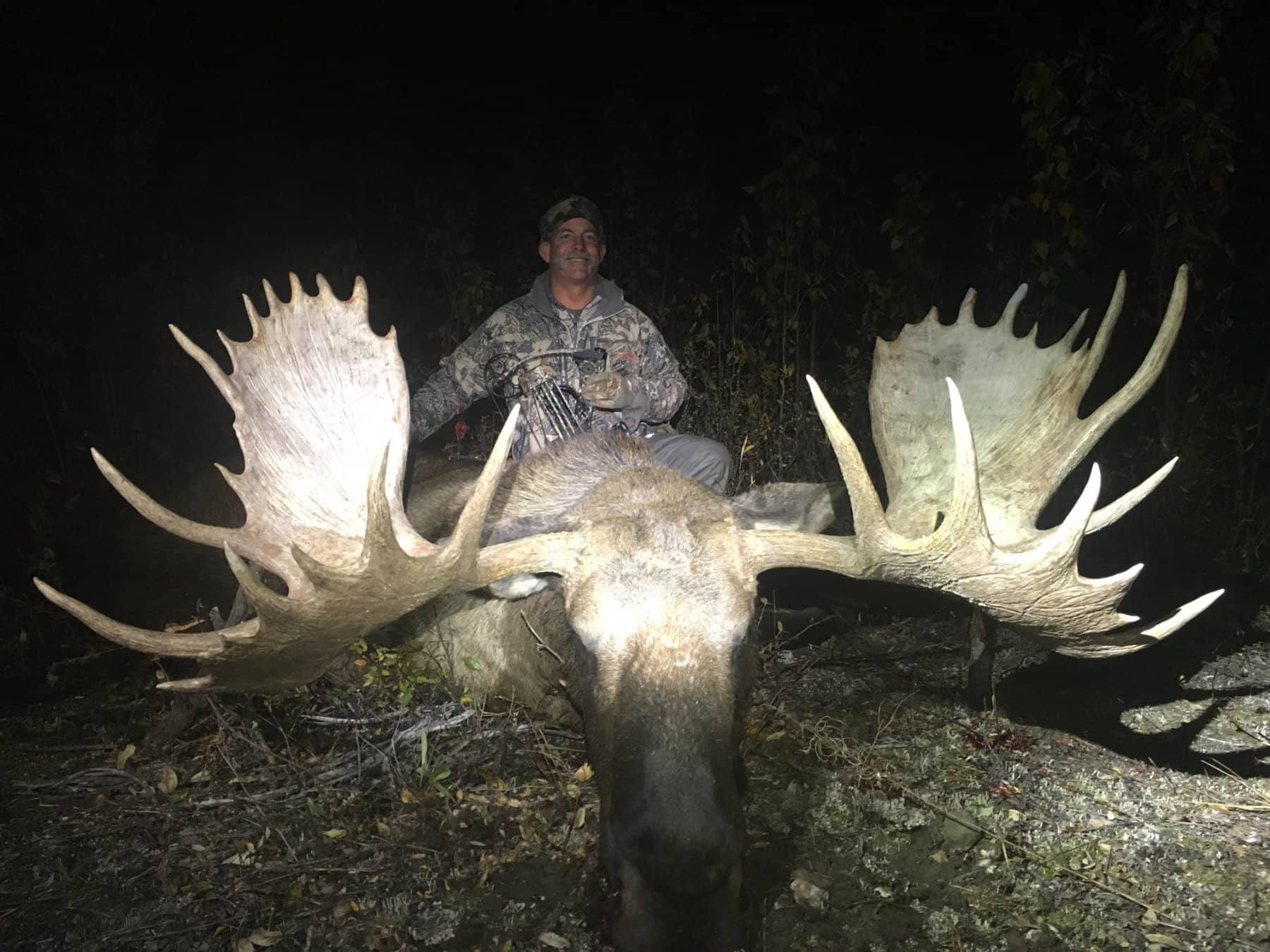 In 2016 I had to pleasure of hunting moose and bear with Luke Tyrrell and crew. The year prior I hooked up with Luke and discussed with him my hope of bow hunting in Alaska. He was honest and upfront with what his camp could and would do as well as how I could apply for a special bow tag and include lots of other valuable information. During the prep time prior to the hunt Luke kept me well informed and made sure I was aware of the types of condition I might be hunting in as well as equipment I should bring in order to help my hunt stay as comfortable as possible. His information helped ensure I had what I needed to help my hunt be successful.

When I arrived in camp I found it to be fascinating, beautiful and every bit of what I was expecting. The crew was beyond friendly , helpful , and most importantly, knowledgeable. I saw a lot of moose and had some great stalks before taking a magnificent bull with the bow. His crew handled my meat and trophy with great care and professionalism. We also saw lots of bear and had several great stalks before I harvested one with the bow. They again took great care of the bear hide and meat.

My meals were fantastic and I left camp feeling like a proud hunter who had worked hard, been treated well, and had the hunt of a life time. I truly feel that every hunt is ultimately what the hunter makes of it and Luke Tyrrell and his crew, and I do mean the whole crew, gave me every chance to live this adventure as I hoped it would be.

Thank you all for allowing me the chance to live a dream.

We’d love to hear from you! Tell us about your experience with Tyrrell’s Trails.

Tyrrell's Trails delivers world-class hunting trips! We invite you to join us and experience the very best in Alaska Hunting. Contact us today →
Get In Touch
Copyright © 2021 Tyrrell's Trails - All Rights Reserved
Design by Netspur
Back To Top